There is no way you could suggest the Palace of Versaille nestles into the countryside of the Ile-de-France region. It is the countryside. The palace and the gardens dominate.

Visiting Versaille is a severe test of patience.

Getting there via the metro etc is easy enough. The testing begins when you have to queue for entry tickets. As I was visiting in mid-April, the online ticketing did not seem to be functioning so had to buy tickets at an agency. Stand in line. Then you have to queue for entry and have your bags checked. After that queue you then have to pick up your audio guide for the Palace. Another queue. I guess if you have come as far as I had, you really have to visit the Palace....but of course this means yet another enormous queue!

Visitors shuffle through the galleries, chambers and corridors posing for photos, listening to their audio guides and sometimes queuing to get through the door to the next chamber.

Many gardens in Europe have the appearance, at least in part, of a natural landscape embroidered with some art, ponds and perhaps a fountain or two. Many have an arboretum that invites you to wander along meandering paths flanked by exotic and sometimes ancient trees. Not Versaille!

The gardens define the French style of parterre and grand avenues. Trees stand to attention in ranks ready for inspection by the King. Ponds and fountains follow a grand design that accentuate the flamboyant characteristics of the palace and courtyards. Each avenue leads your eye to another grand statement made by the Kings garden designer. Most of the credit for the structure of the gardens could go to Louis XIV and Andre le Notre with help from an army of others who expanded on the work begun by Louis XIII.

The grand canal is a statement in its own right. The grand canal dominates the view from the rear courtyard of the palace (if you can call any side the rear). The canal is no natural watercourse but a man made lake deep enough to sail and row upon. And by man made, I mean in the true sense of the word. The excavations being completed by hand tools and wheel barrows over an 11 year period. 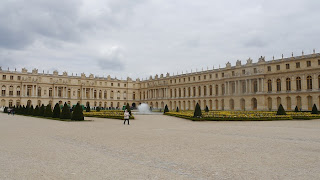 One cannot but admire the skill of the engineers and architects of the day to make this, not only work, but endure for over 300 years. Imagine the stress of the "clerk of works" trying to manage a huge workforce when the price for losing an argument with "the boss" could be the guillotine.

You cannot fault the level of workmanship and the overall effect but you can't help wonder at the arrogance of the King who considered this his own. I wonder how the King would feel if he had any idea of the fate of his project. 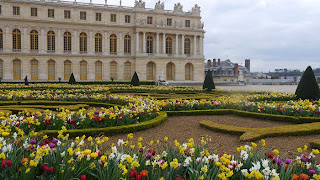 Instead of private gardens and intimate salons decorated by master craftsmen and artists, today thousands of visitors knock on his door every day. They traipse through his bedroom chambers with cameras recording every detail.

The gardens are assailed by golf carts, mini-trains, bicycles and pedestrians posing in front of fountains and statues.

The cost of building such a structure must have been a severe strain on the economy at the time and I'm sure the original builders would never have imagined what dividend it would pay for the community into the future. I would imagine that, by now, it has paid for itself.


At least the gardens let you slip out of the queue and you can wander the 800 hectares to suit yourself, stopping as you please to inspect the ranks of trees and the magnificent and perfect parterre gardens. 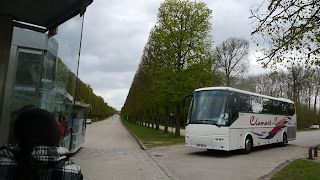 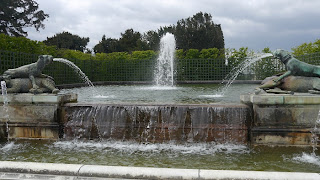 Instead of walking you could hire a four seater golf cart on an hourly rate to cruise the highways and byways of the estate or you can catch the hop on - hop off mini train that will take you to Le Grand Triannon and the canal.

The fountains do not operate continuously but is an added extra to your ticket. To see the fountains operating certainly adds to the spectacle.

The palace is certainly spectacular and that is the reason it is sooo popular. Over six million visitors each year.


I think it would be a shame to miss the palace and just visit the gardens but you must allow for a big day to do all and hope, with all the crowds, that everyone has applied deodorant! 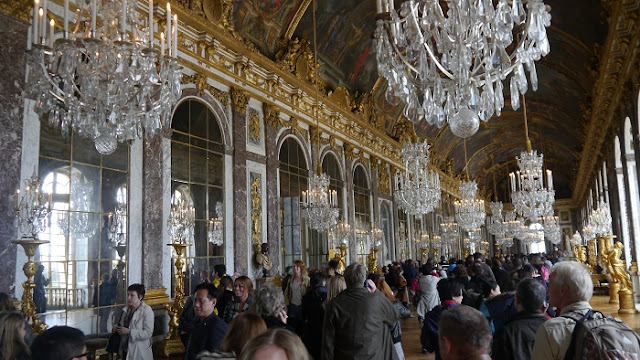