One wonders at the arrogance of the 18th and 19th century rulers of Europe but at the same time, you thank them for their grand vision. How many other gardeners and landscapers have drawn on the collective experience provided by the great gardens of Europe.
This Prussian palace and garden is inspired from the French garden at Versailles. Even the French name Sans Souci (without care or could be no worries). Not only French but Sicilian, Italian and Dutch influences the architecture with a smattering of Greek mythology.

Being early spring, much of the garden was only showing the promise of the months ahead. I had caught the emperor in his underwear so to speak. 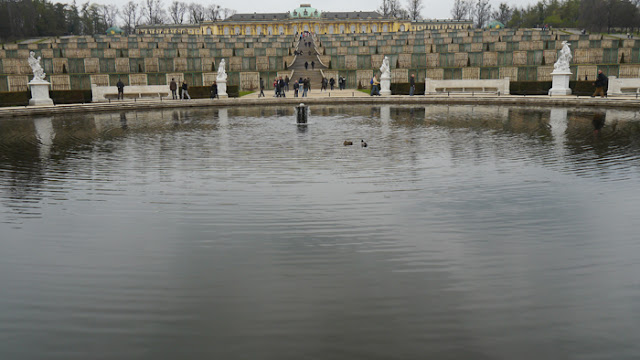 Still this was an opportunity to appreciate the fully deciduous plantings that are not readily on offer in the temperate parts of Australia. 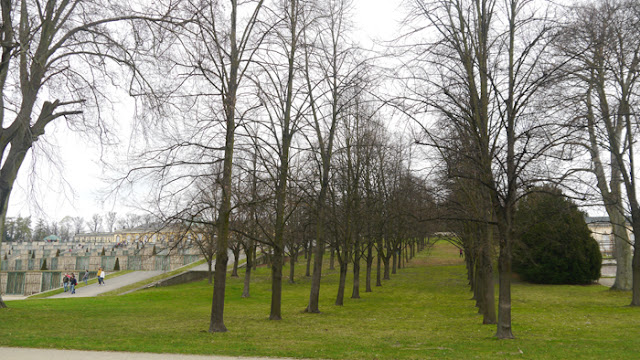 The Sans Souci Palace construction predates European settlement in Australia by almost 50 years. The final shape of the garden was not complete for about another 100 years. The garden designer certainly had a long view. 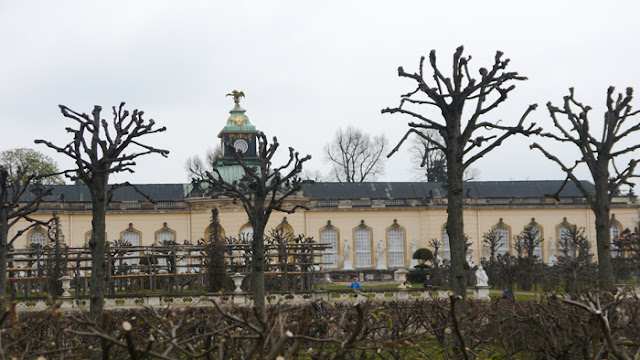 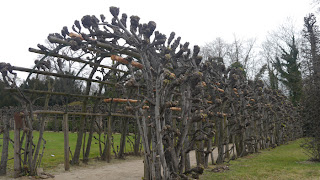 Needless to say, the trees and vines have been established for over 100 years and the vines covering the various arbours creating green tunnels in the summer show the effects of countless prunings. 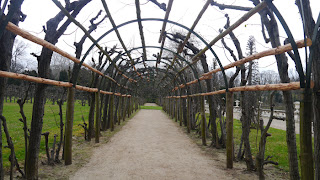 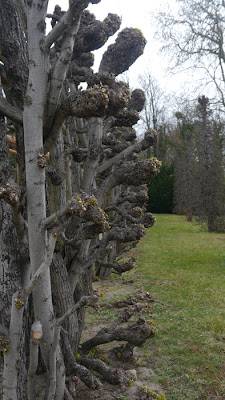 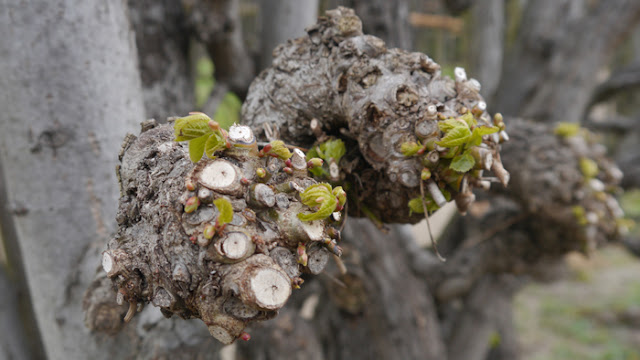 Tree trunks, laid bare, show their underlying form and texture which is often obscured by their normal summer foliage. I found the subtle displays of bracket fungus and moss fascinating. 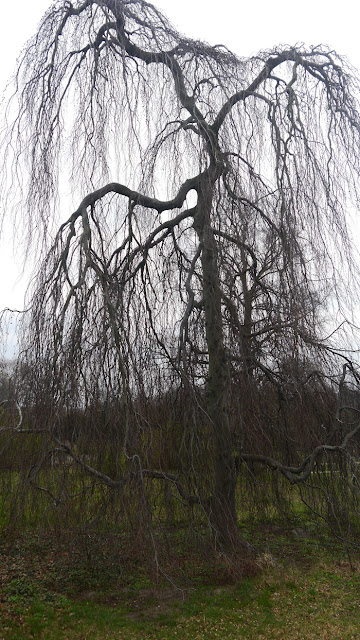 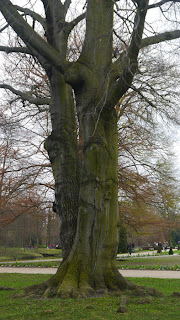 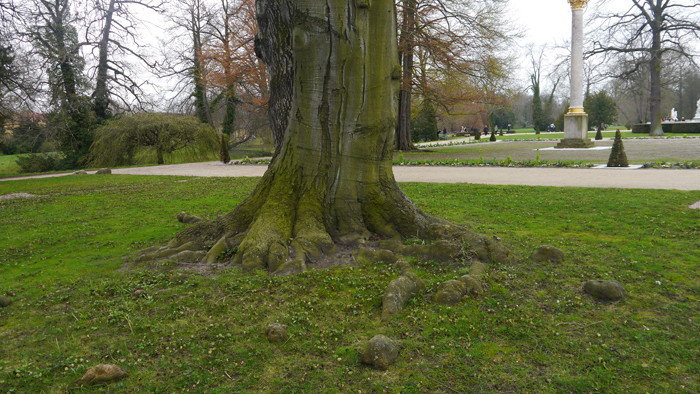 Massive trees with pneumatofores, almost like giant mangroves surrounded by the green tips of bulbs instead of water and sand. 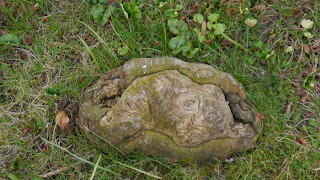 It is tempting to compare Sans Souci to Versaille and there are some similarities but personally, I think Sans Souci is more livable than Versaille. I could see me waking up there on weekends. Cooking a breakfast bar-b-que in the back courtyard while the gardener catches up on the pruning and mowing. I would have to do something about all the sticky beaks looking over my fence though. 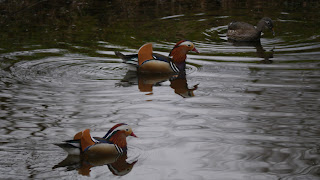 Talk about over the fence, if you look out of the front door of the palace you have a grand view to a neighboring hillside that is adorned with a ruin. You know what countries with long histories are like, ruins here and there, well this ruin is by design. The hill actually houses a reservoir for the water supply for various fountains and the ruins are a decoration visible from the front of the palace. The story goes, however, that the fountain system did not work until after the invention of the steam engine and steam powered pumps powerful enough to lift the water from the Havel River and fill the reservoir. 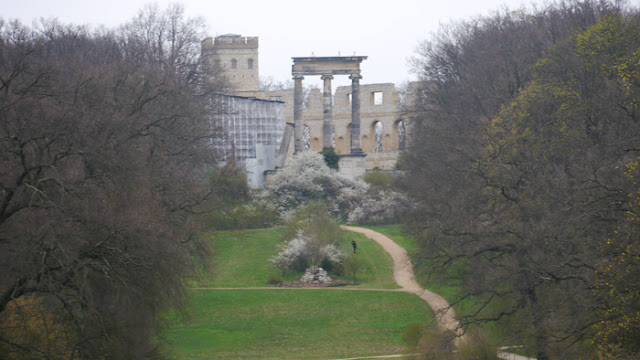 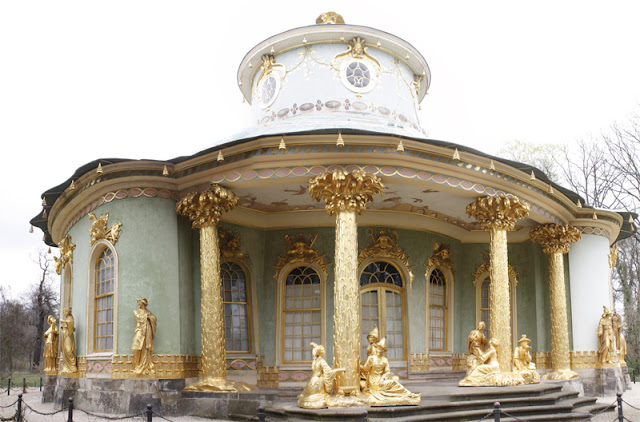 And what garden is complete without a Chinese garden pavilion flanked with golden figures and protected by security motion detectors activated as soon as you step over the chain fence. 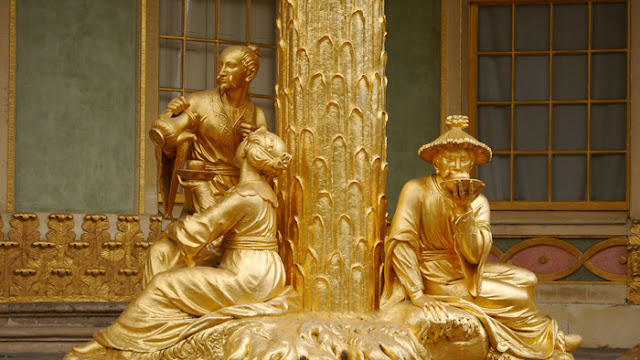 The Chinese house must have cherry blossoms. 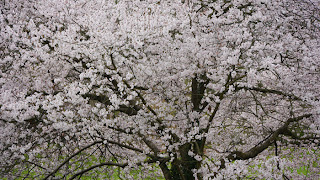 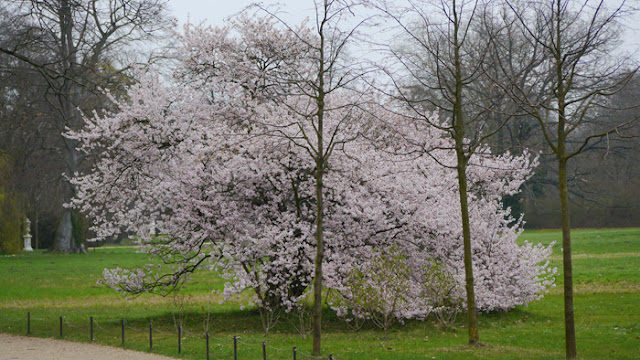 Wandering through Sans Souci park is an enjoyable way to spend a full day. Any way you go you will find some point of interest. Of course if you want to see it all you will have to be more organised and follow one of the recommended tourist walking routes.
Don't overlook the picture gallery next to the Palace which contains painting by many old masters such as Rubens and Caravaggio.

Unfortunately for me, the New Palace was having a facelift and hair transplant at the time of my visit. The building was surrounded by teams of workers and machines cleaning facades, replacing paving and turf in preparation for the exhibition “FRIEDERISIKO – Frederick the Great”. 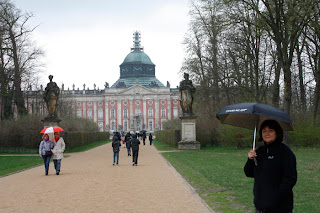 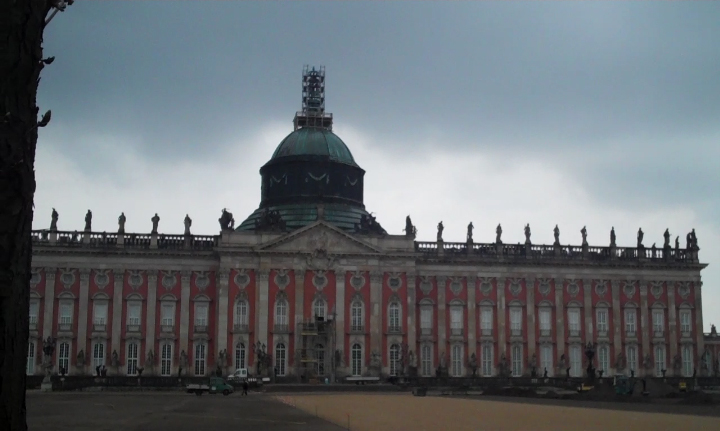 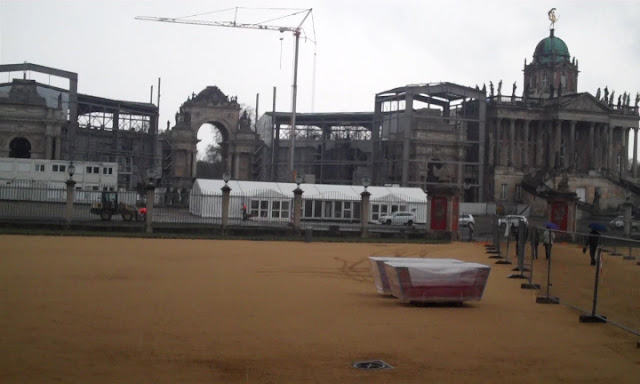 The Sans Souci garden houses an annex of the University of Potsdam. In fact the University has a sizeable presence in the garden although it did not appear to be intrusive or affect the enjoyment of the garden in any way. 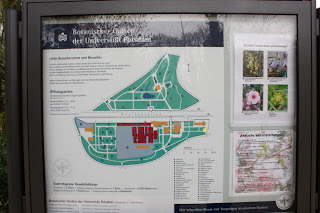 It appeared to me that the university was deeply involved in the operation of the glass houses on site and maintenance of the vegetable garden. So perhaps the I should thank the staff and students of Potsdam University for the tremendous displays and plant arrangements in the glass houses. 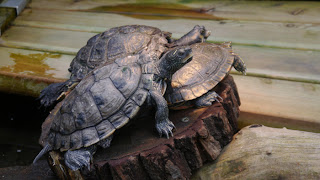 I liked the tortoise sanctuary they had in one of the displays. Evidently they had taken in some unwanted pet tortoises because the tortoises had grown too large for a small domestic fish tank and too aggressive for the previous owners to manage.

The greatest influence on Potsdam was King Frederick II who was a patron to the arts and sciences of the time.
Frederick is now buried at Sans Souci and visitors often leave flowers on his gravesite. Some leave potatoes. It was King Frederick the great who introduced the humble staple, the potato, to prussia.
But that's another story.