I came into Wroclaw on an overnight train from Cologne via Dresden.
Having a first class ticket on the Polish rail seemed to mean that I had a compartment meant for six, to myself. A fairly comfortable trip on PolRail although the heater in the compartment seemed to be stuck on high. There was a lot of construction work at the railway station so I didn't have time to appreciate the 19th century architecture. A short ride in a taxi and I was enjoying the luxury of my hotel on the banks of the Odra river.

I had a very impressive room at the HP Park Plaza with a top floor view of the river and old town. Although very comfortable and extremely hospitable, the structure itself, being a large glass fronted building seemed quite at odds with the surrounding architecture.
This was my first visit to Poland and I did not quite know what to expect. Wandering through the streets you see old buildings and cathedrals surrounded by cobblestones similar to many cities in Europe and then you are confronted by pictorial reminders that this city was in ruins  at the end of World War 2.

Buildings that were not destroyed by cannon and bombs were dismantled by the retreating German army for raw materials to build last minute defences against the Russian Army. After the war, bricks from the city were ferried to Warsaw to help with the reconstruction effort in that city.
This history, in my view makes the town reconstruction all the more remarkable. Most of the original architecture has been restored and now, as you trip over the cobblestones in the street, it is easy to drift back two or three centuries. You snap out of it when you stumble over a 21st century shopping centre, tucked in amongst the old buildings that has all the usual modern conveniences.

More by good fortune than design, I happened upon a gate providing access to the University of Wroclaw Botanic Garden. The Polish Ogrod Botaniczny sounds much better than Botanic Garden.

Now considering the harshness of the last Polish winter and the fact that it is only spring, this garden is starting to show the promise of summer. The tips of  bulbs were beginning to show, some daffodils were in full flower and mass plantings of pansies added to the colour of the garden. The alpine plant display in full flower, I found particulary delightful.

The extremely thorough plant labelling was due, no doubt to the science staff and students at the university who use the garden as a teaching resource. Beneath some trees lie large carved representations of the nuts or fruits peculiar to that species of tree.

It wasn't unusual to see dwarfs placed at strategic places around the garden either. The dwarves started as a political statement during the time that Poland was behind the Iron Curtain. They have now become somewhat of a tourist attraction. But that's another story.

The strong connection with the university and education generally is reflected in the elements of the garden layout.

Established in 1811 as a scientific institution, the plantings are grouped in sections to exemplify different plant characteristics such as types of flower distribution on stem, methods of pollination, leaf, and fruit types. These collections include edibles such as beetroot and potatoes as well as plants used historically for medical purposes. Wormwood is one example. 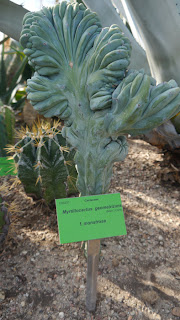 The garden has a collection of green houses each devoted to a particular class of plants, as they usually are. I liked the little touch with the sombrero and poncho in the succulent display.


The collection of aquatic plants is a particular source of pride for the curators of the garden. Their collection consists of 350 different taxa of tropical and sub tropical water and marsh plants.

No mean feat when the recent winter had temperatures at 20 degrees celsius below zero and lower. Plants such as Hygrophila, which has the status of a weed on the Australian east coast are entirely unknown in Poland. With winter temperatures like that, I'm not surprised.
The greenest of the green houses is devoted to a large collection of Ivy (Hedera). The green house even had ivy transfers covering the glass. Must be someones favourite!

This garden even has a display of coal, which I suppose was a plant sometime or other, and fossilized trees. As part of the alpine plant display, the garden has a large scale cross section of strata containing a coal seam and fault line. This exhibition illustrates the evolution of nature providing fossilized evidence dating back to the Pre-Cambrian era.

The arboretum surrounds a natural pond which is a remnant of the Odra river. The pond forms a perfect focus for the arboretum which is laid out like a recreation park in three geographic groups. Pecans, willows and larch trees, among others are representatives from North America, East Asia and the Caucasus.

A bridge and a timber walkway cross the pond which in summer is covered with a range of aquatic plants such as Marsilea quadrifolia, Schoenoplectus americanus,and Trapa natans. Most of these aquatic plants have weed status in Australia but suit the application here because they are quick growing and vigorous.


The view from the alpine display looking back into the garden really sums up this relatively compact but exquisitely presented garden.

My advice to you , if you are heading to Europe, take a trip to Poland, you won't be disappointed I guarantee you. Polish people are welcoming, friendly and fortunately for me, many people spoke some English. Of course this only made me feel like a heel because I only speak English and, to top it off, When I thought I was saying 'thankyou' to people, my husband pointed out to me that I was actually saying 'hello' in a weird Australian accent, leaving these people totally bewildered I am sure.
Posted by Karen at 11:12