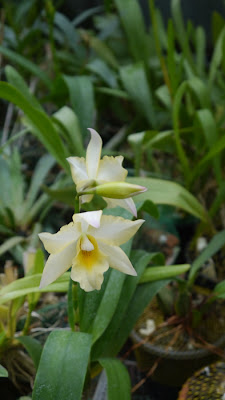 Visiting the botanic gardens in Krakow really reminded me of the strong common interest shared by plant enthusiasts.

A last minute email contact bought me knocking on the door of the offices of  Professor Bogdan Zemanek of the Jagiellonian University.
Even though the the garden was not scheduled to be open for another two weeks, Professor Zemanek kindly offered a tour of their facilities.

Add to this that it was the Friday before their Easter long weekend and the weather was cold and damp to gauge the graciousness of his offer....Polish people are so nice! 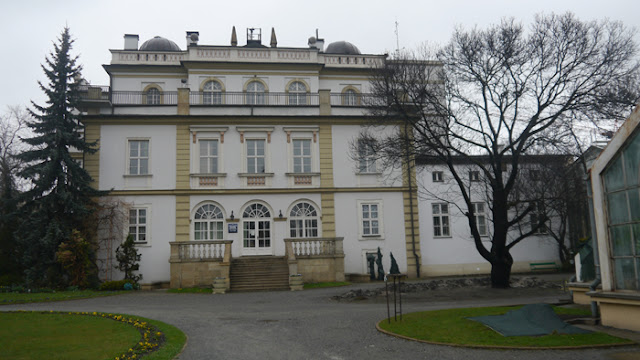 The botanic gardens attached to the Jagiellonian University are the oldest in Poland.


Founded in 1783 on the land surrounding a small palace built as a suburban villa around 1600 which had an existing Renaissance garden.

An observatory was incorporated in the garden precinct using the palace buildings in 1792. The street outside the gardens is called Mikolaja Kopernika, named after one of the local talents called (in English) Copernicus who, around the 16th century, is credited for the theory that the sun is the centre of the solar system circled by the earth and other planets. So this area has a long history of scientific investigation.

The garden itself is situated in a section of Krakow that was once the bed of the Vistla River. The river changed its course and left the clay bed behind. The main pond in the garden is a remnant of a bend in the river 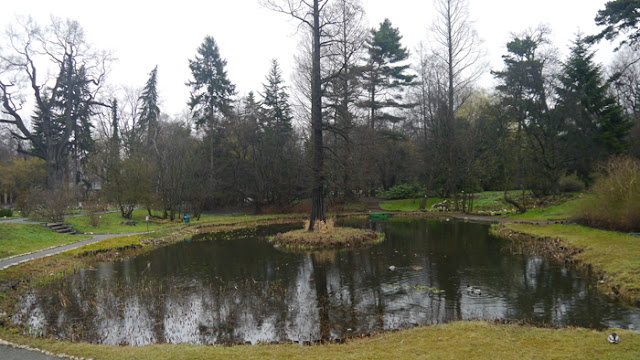 The first section of the garden you see is the geometric display of plants in the French Baroque style. This is the legacy of the the original garden design which was fashionable in the 18th century and reflects the early use of the land as a Renaissance garden belonging to the Czartoryski family. 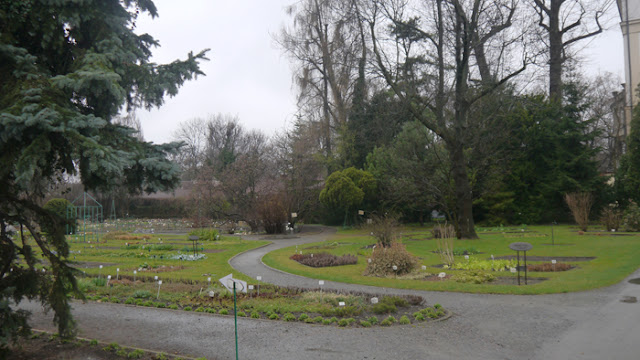 The second half of the 19th century saw upgrades to the garden which included a pond, which I mentioned before and an increase in the plant collection brought from Vienna, Paris, Vilnius, St. Petersburg and many local palace gardens.


How lucky are we that science and exploration were so highly regarded in the 18th and 19th century that so much effort was put into the nurturing and display of rare and unusual plants. We are indeed lucky that this infrastructure still exists considering that today almost everything must suffer a cost-benefit analysis and bean counters have the last say.

The garden somehow survived Nazi occupation during the second world war also, when all other sections of the University were closed. Fortunately the Polish staff, gardeners and assistants managed to minimise damage to the collections and this collection became a source of material for the restoration of other botanical gardens.

A collection of orchids in the glasshouse

The second half of the 19th century saw the introduction of tropical plant collections mainly due to the efforts of travellers and explorers of the new world. The main benefactor of the Krakow gardens was Joseph Warszewicz who became the director and chief gardener. Joseph travelled to Central and South America collecting plants and seed samples which he used to develop the collection at Krakow. 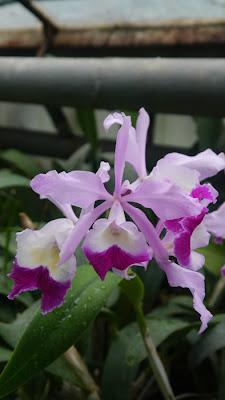 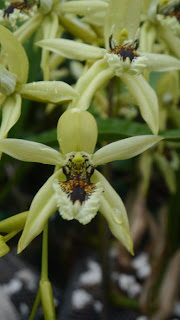 There are three glass houses here, two of which are open to the public. The largest is "Jubilee" which consists of the palm house and a long hot house sectioned for different species of plants. The glass house, Jubilee, opened in 1964, is named to commemorate the 600th (yes, 600) anniversary of the Jagiellonian University.


According to Professor Zemanek, originally the site adjacent to the Jubilee glass house was the highest point in the garden and when the garden was planned, had commanding views of the Vistla River and surrounding valley. Gradually this view has been eroded by surrounding buildings so that now you can only see across the road.

The Victoria glass house derives its name from the genus of water lilly that grows in the pond there, the Victoria amazonica. This is the oldest of the glass houses in the garden being built 1786 - 1787

The "Dutch" glass house, Dutch being the type, designed for epiphytic plants and orchids but also contains rare plants which are kept isolated. The Dutch glass house is normally closed to the public but is sometimes used for educational visits.

The emphasis on education is obvious with the target group
being all ages. All plants are labelled and some of the glass house plants have full descriptions and pictures of dissections showing particular adaptations that have made the plant successful.

I found the Myrmecodia tuberosa (the ant plant) particularly fascinating having seen examples previously at the botanic gardens in Kew, London.


Krakow Botanic Garden is one of the European gardens exhibiting a Wollemi pine. Professor Zemanek explained "we have two specimens of the Wollemi pine. One from the Polish collection and another supplied from Dresden Botanical Garden".
They plan to place the Dresden plant in the outside garden to see how it copes with the harsh winters.
"The level of frost at Krakow is more severe than Dresden. At Krakow we may have a severe frost event every twenty years that Dresden may experience every 100 years" explained Professor Zamenek.

Sometimes it's flattering to see the level of interest in plant species from the southern hemisphere. Many of the plant species indigenous to Europe have been studied for a thousand years where as, from the European point of view, the south was "Terra Incognita". Some regions only being explored botanically from the last 200 years or so and surprises, like the Wollemi pine, still possible.

What I particularly loved about these gardens was the level of care the staff give to the plants. the layout in many areas replicated a home garden, with lots of finishing touches that added to the charm.


The Aboretum is the largest part of the garden and is arranged as a landscaped park with examples of trees from East Asia and North America. The landscaping is complemented with collections of ornamental plants such as lilacs. The pond, which could be called a billabong, provides a space for the water plants. The water plants here are mainly native as introduced plants from more temperate regions do not survive the harsh winters. This section of the garden provides a very tranquil setting and is guarded by an old Ginkgo and a 200 year old common oak. Many specimens of trees here are more than 150 years old.


Botanical Gardens are research units and deeply involved in the protection of flora and vegetation of the world and in Professor Zemanek's words "Living museums".  Not only providing knowledge of the principles ruling nature but also by framing the minds of the young generation, making people living among stone walls of cities conscious of the spiritual dimension of nature.