About a 15 minute journey from Friedrich Strasse S Banhoff to Botanischer Garten, coupled with a short walk brings you to the gates of the the Berlin Botanic Garden and Museum at Dahlem. 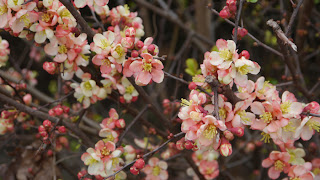 I enjoy the experience of botanic gardens because I can visit almost the whole world of horticulture just by walking and compare vastly different regions of the world under the same seasonal conditions.
It would be a bit optimistic to expect the garden in Berlin to be in full leaf in April, but spring brings out those transient blossoms and flashes of colour in unexpected places. 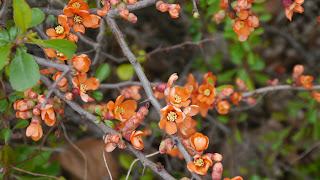 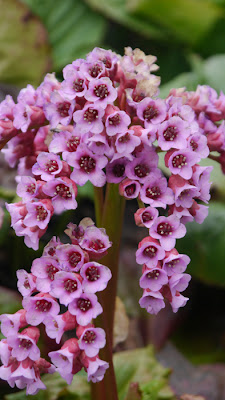 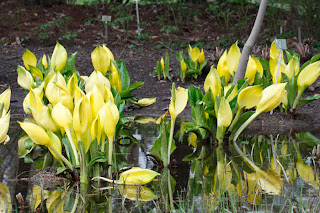 The seed for the modern Berlin Botanical Garden was planted in the late 1600's but had to be transplanted about 200 years later to it's present location in Dahlem when it outgrew the original  location in Schoneberg.


The gardens now cover about 126 acres or about 50 hectares and houses about 22 000 plant species.
If you use the S Bahn to get to the garden you will most likely enter from Unter den Eichen. And, of course, the first thing you will do is shout yourself a hot coffee or tea at the restaurant inside the gate. Even given that the weather wasn't as warm as it could have been, I found the courtyard of the restaurant, with a view over the large pond and varieties of Trumpet-creeper and Honeysuckle, very pleasant. It would be a great spot on a hot sunny day. 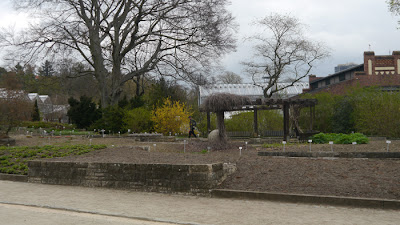 I like to not only look at the endless varieties of plants that populate our planet, I also like to touch........ 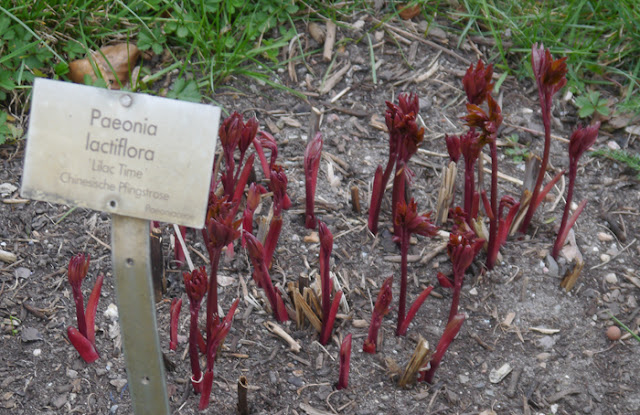 You are invited to do just that in the Fragrance and Touch garden, a short stroll from the restaurant at the edge of the garden. April was just a little early to get really involved but the idea was there. These beds contain plantings of spice, herbs and perfume plants and you are encouraged to rub the leaves to liberate the various fragrances. A great idea to help involve the younger visitors. 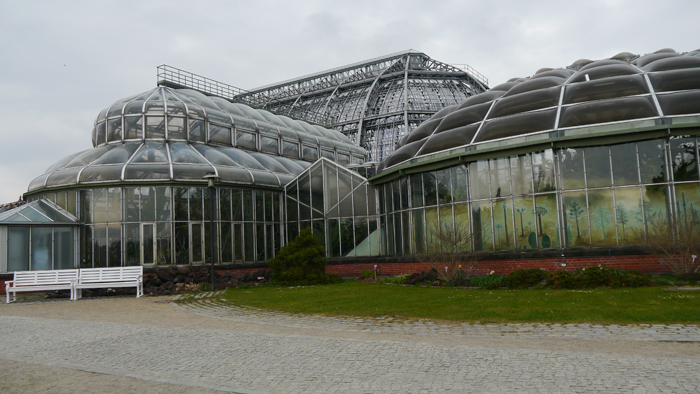 The time I spent at the botanical gardens was marred by intermittent showers and cold conditions so the 6000 square metre display of tropical and sub-tropical plants in the 16 green houses provided welcome respite.
The green house also houses a cafe that sells the most delicious soup and rolls. Much appreciated in the conditions at the time.

The layout of the green houses is very special. Fourteen of the sixteen green houses are linked and form a continuous walkway where you stroll through various climatic and geographic regions of the world of horticulture. I roamed around for almost three hours and I'm still not sure I saw everything on offer. 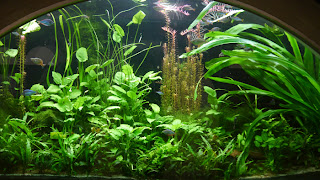 The glass houses are interconnected with automatic doors that invite you in when you approach. Oddly enough, the first "garden" I saw was under water and contained several species of tropical fish. 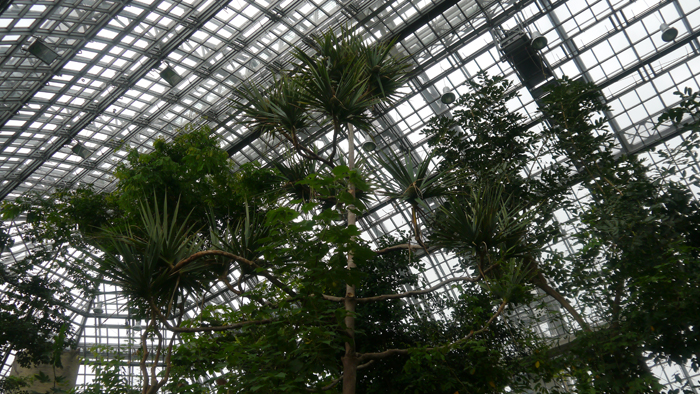 Pushing on, I entered the main tropical greenhouse and was amazed by the range of plants living together in this environment. The roof height is 23 metres and the length and width is 60 x 30 metres so you get some idea of the amount of foliage it takes to fill this volume. 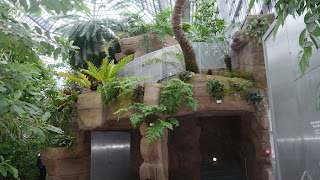 Much of this area is taken up with palms, lianas and giant bamboo but the under-story completes the picture. Add in perfect examples of tropical plants such as Amorphophallus titanum  (unfortunately not in flower) and you have a fairly convincing tropical jungle.

Elevated vantage points allow views across significant  sections of the green house and add to the interest.


Looking like a refugee from the "Little Shop of Horrors" is the Welwitshia mirabilis tucked into one of the annexes to the main tropical greenhouse. Just needs some lip balm and a little lipstick .......


Two of the adjoining connected sections are dominated by collections of Euphorbia, Aloes and succulents from the "New World".

The pathway through the succulent greenhouse is divided into a low road and a high road.

You can get a caterpillar eye view of what makes these plants so interesting for many people. It also gives you the opportunity to hug one if you are so inclined. 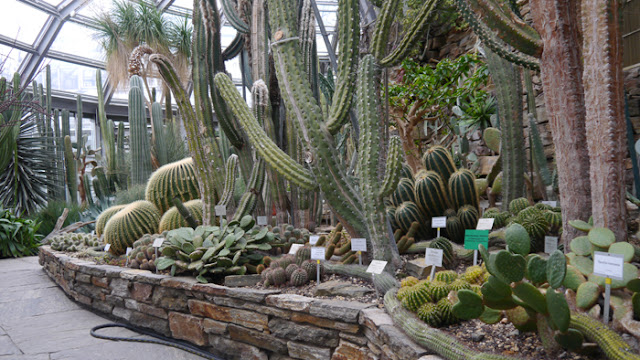 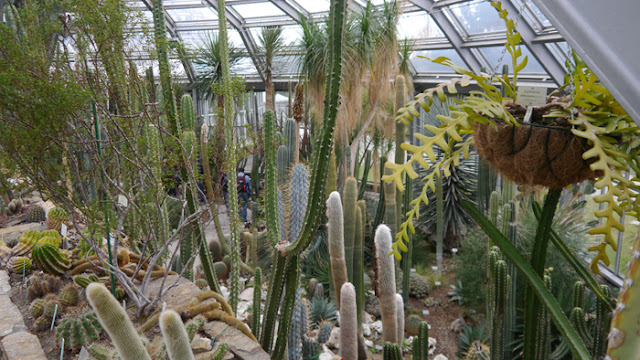 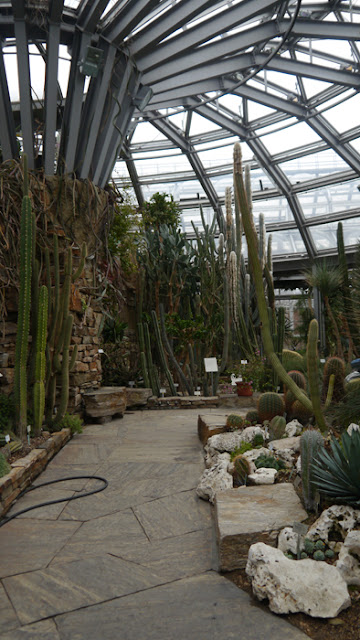 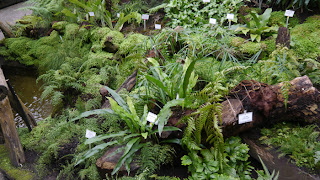 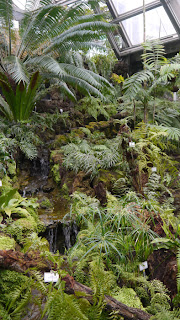 Many displays of bromeliads and orchids used rock walls as the bedding material. The rock looked like pumice, a porous volcanic rock. The texture of this material made it easy for the plant to get a foothold.
Meandering paths trimmed with moss and ferns create a believable outdoor effect. The paths lead you over a footbridge across a running stream and after a while you forget you are in an entirely artificial environment 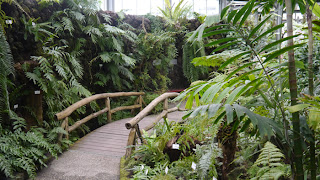 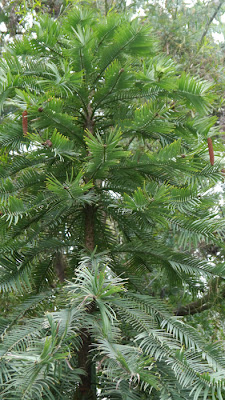 
Nothing too small or insignificant

Moss growing typically in between paving and rubble. Not very glamorous but typical.
There is a sunken viewing area in the middle of this display so you can get a close look at the mosses without  bending over too much. They thought of everything. 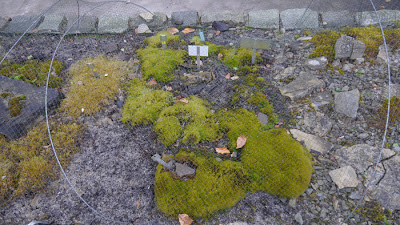 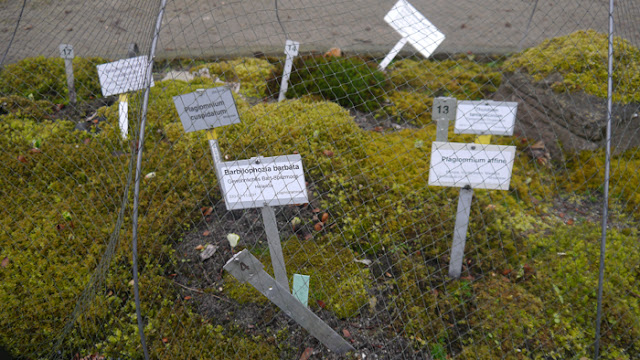 The Botanical Museum really gets into the nitty gritty of plants. My day was fast running out by the time I got there. I should have allowed another hour at least for the museum.
Apart from the usual suspects, botanists from times long past, there were many exhibits inviting interaction and detailed explanations of how plants work. 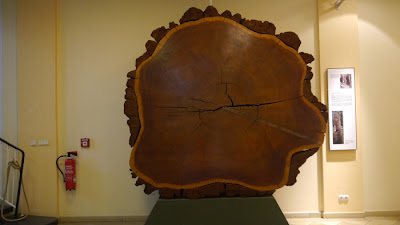 This large cross-section of a Sequoia sempervirens from California is resident in the museum entrance. The slab was cut from a 775 year old tree.

There were large scale models of algae, flowers and fruits highlighting the adaptions of plants to the environment and reproduction strategies that have made some plants successful. 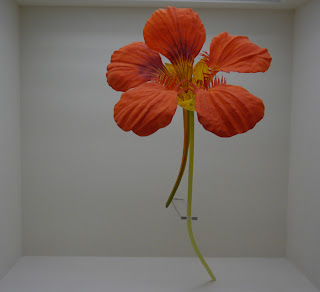 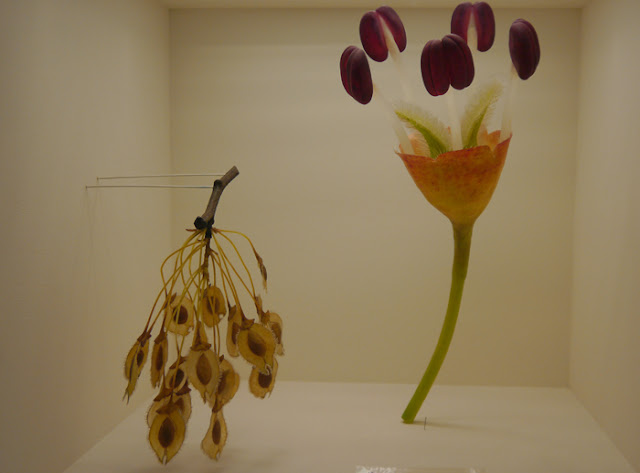 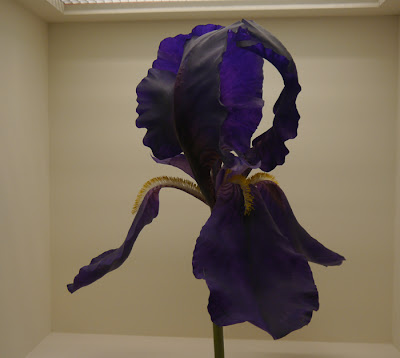